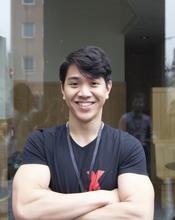 Arnold Christian Setiadi was born in Norwalk, CT on September 24, 2000, but was raised in Bridgeport, CT. At a young age, Arnold always loved making videos and skits with the purpose of entertaining others and expressing his own creativity and originality.

Arnold is a Chinese-Indonesian, First-Generation, Low-Income QuestBridge Scholar in Pierson double majoring in Theater & Performance Studies and Political Science. At Yale, he is mainly involved in the theater, entertainment, and media realm! He is primarily an actor, but has also produced and written for the Yale Dramatic Association, Yale Drama Coalition, and Yale Cabaret (Asian American representation for the win!). Most recently, he produced, wrote, and starred in “Pancasila,” an original full-length comedic play that focuses on the narratives of the Asian American diaspora.
He has also worked numerous on-campus jobs, such as a serving as a Student Assistant at Payne Whitney Gym, making (pretty delicious, if I do say so myself) tortillas at Pierson Buttery, and doing several Research Assistant tasks for the Political Science Department (i.e., gene editing, international legislation, climate change research). Other activities include: TEDxYale, YCC, YMUN, Yale IM Sports, and Yale in Hollywood. His other interests include staying active by working out or playing soccer, singing, eating, watching shows, and hanging out with family and friends. As long as he’s in the process of creating ART, he’s content.