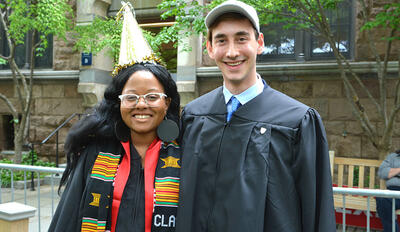 Each year, Yale College awards prizes to students who have excelled in the performing and creative arts throughout their time at Yale. While many of these prizes are awarded during Commencement weekend’s Class Day ceremony, some are given at other times of the academic year.

Louis Sudler Prize in the Performing and Creative Arts (Est. 1980)

The Louis Sudler Prize in the Performing and Creative Arts is awarded annually to two graduating Seniors who, in the opinion of the Faculty, have demonstrated excellence or the highest standards of proficiency in performance or execution, and in the field of composition in one of the following general areas: architecture and design, creative writing, dance, film and video, music, theater, painting, sculpture, photography, and digital arts.

The Louis Sudler Prize in the Performing and Creative Arts recipients

The Marina Keegan Award for Excellence in Playwriting (Est. 2013)

This award honors the memory of Marina Keegan ’12, a gifted playwright. Graduating seniors in English and Theater and Performance Studies, as well as seniors in other departments who have studied playwriting at Yale, are invited to submit a portfolio of dramatic writing for consideration – two plays, at least one of them full-length.

The Swensen Scholarship, given in honor of David Swensen PH.D. ’80, is awarded to Yale undergraduates who excel both in the classroom and in athletics or the arts. Recipients, known as the Swensen Scholars, are awarded funding to practice the highest caliber training in their selected field. Because students must be in the top echelon of their pursuit, funding is only be provided for nationally/internationally recognized endeavors that will continue to set them apart from their peers. Swensen Scholars will become a cohort of achievers recognized as the epitome of Yale and the importance of curricular and extra-curricular excellence as integral parts of a liberal arts education.

Named for musicologist and author William Waite, MUS ’51, this competition is open to all undergraduate classical instrumentalists enrolled in their first year, sophomore year, or junior year at Yale. Winners are invited to perform their concerto at a Yale Symphony Orchestra concert the following season at a date to be determined by the Music Director.