"The high are low. The low are high. The dying will live. The living will die." 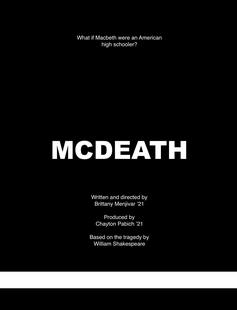 The year is 1999. Cory McBeth, known as “McDeath” due to his reputation as a morbid loner, is a dissatisfied senior at Inverness High. One fateful day, he puts out a chem lab fire gone wild, and he and his equally “uncool” girlfriend LM become known throughout the school. When they get invited to a party hosted by the jocks they envy, they decide to play a revenge prank… but it gets out of hand, and they soon find themselves trying to cover up a dead body. McBeth begins to develop harmful desires, and when he gets a gun in his hand, tragedy ensues, following the pattern of Shakespeare’s “Macbeth.”

Shakespeare’s classic story about dangerous concepts of power, reimagined for the modern era.

A Note from the Production Staff: Although McDeath is primarily an adaptation of a Shakespeare work we’re passionate about, we would also like to use it to make a thoughtful statement about gun control, building prosocial communities, and intervening when necessary so that a safer, healthier world can be established. We pledge to think carefully about every creative decision we make, and we would like to make the Yale community aware that the cast and crew will be setting up a fundraiser to raise money for a related nonprofit (TBD) in conjunction with the show.