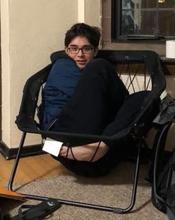 James began his musical theater career as the Music Director of Fame Jr. in the eighth grade, having never seen a play before. Has it gotten any better? Probably not. Since then, James has had several star turns both on and off the stage, including a brief, yet moving tuba solo for which he was nominated for a Metro Theater Award (think Patti LuPone). During his time at Yale, James continues to be owed money by the Dramat. So he has lots of leverage. Thanks for stalking me.