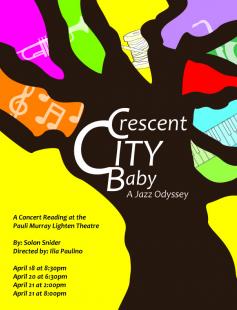 “Crescent City Baby” (a staged reading), Solon Snider’s senior thesis in Music and Theatre Studies, is the product of years of research and collaboration. Developed with guidance from Professor Joseph Roach through his seminar, “Literary New Orleans Performed,” it is a musical set in 1933 New Orleans and Chicago, at a time when many of New Orleans’ celebrated jazz musicians (such as King Oliver, Jelly Roll Morton, Louis Armstrong, Kid Ory, Sidney Bichet, and many more!) were moving to places like Chicago and New York. In New Orleans, a city of mixture—ideological, racial, cultural—a musician who played with Buddy Bolden (the quasi-mythic founder of jazz), his handyman, his forbidden ex-lover and their mixed-race daughter, the daughter’s own forbidden lover, and a communist stripper unite to create their own radio station, where they can play music together without constraint. In “Crescent City Baby,” we trace the Odyssey of American music out of New Orleans and into the minds and hearts of the world through a plot that mirrors Homer’s Odyssey. The 1933 Chicago World’s Fair becomes the site of Odysseus’ (Trent’s) adventures, while New Orleans comes to represent Ithaca, where Penelope, Trent’s forbidden lover, stays, leaving room for a suitor (Mara) to pursue her love. As we trace their adventures, we learn that you can’t take the jazz out of New Orleans, and you can’t take New Orleans out of jazz.