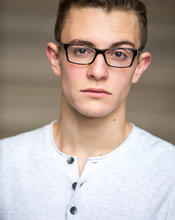 Danny Germino-Watnick is a rising sophomore in Timothy Dwight College intending to study English and American Studies. Past Yale credits include George in She Loves Me, Paul in Company and Muscle Man in the original production of Saturdays, which debuted this summer at the New York Musical Theater Festival. When he’s not acting with YDC, he can be found singing with Doox of Yale (Yale’s first all-gender TTBB a cappella group), performing with The Fifth Humour: Yale’s Oldest Sketch Comedy Group, or speaking way too loudly in one of Yale’s many resonant spaces. He is a 2017 National YoungArts Foundation Finalist for Theater and an alumnus of the National High School Institute Theatre Arts Division.