by Stephen Sondheim and Hugh Wheeler 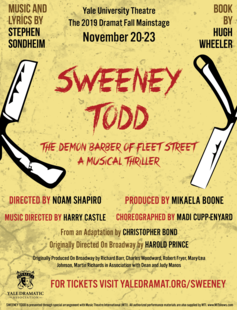 A wrongfully convicted man seeks revenge. A struggling small business owner does anything to survive. A child is separated from her parents. A young woman isn’t believed. A politician abuses his power. An immigrant hides their identity. A couple is punished for falling in love. A young adult is left to pick up the pieces. Thrilling and dark, funny and terrifying, Sweeney Todd tells the story of a community devouring itself from within and the potential for violence that lies within us all.

Stripped down to reveal the complicated psychological truths at its core, our production will approach Sweeney Todd as if it were a new work, free of expectations and pre-conceived assumptions. Reimagined for the twenty-first century, our production is inspired by British cafes, American diners, and fast food chains that serve as de-facto community centers across both the UK and US. We are seeking to build an inclusive cast and production staff to tell a story that reflects our world today, set in one of the most diverse cities in the world. Students of all gender identities, sexual orientations, races, ethnicities, abilities, and body shapes are encouraged to audition.

Sweeney Todd is the Yale Dramatic Association’s Fall Mainstage and is professionally directed and professionally designed. To become involved in the production please contact Mikaela Boone at ms1@yaledramat.org.