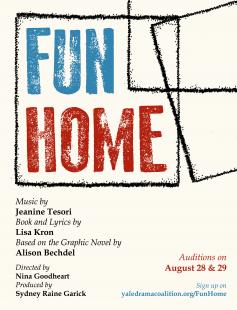 “My dad and I both grew up in the same small Pennsylvania town, and he was gay, and I was gay, and he killed himself, and I… became a lesbian cartoonist.”

Fun Home tells the story of Alison at three different ages, as she grapples with memories of her charismatic, explosive father and comes to terms with her sexuality. Based on the acclaimed graphic novel memoir by Alison Bechdel, Fun Home is also the winner of 5 Tony Awards, a Pulitzer Prize finalist, and one of the only Broadway musicals to feature a lesbian protagonist. Hilarious, heart-wrenching, and ultimately hopeful, Fun Home is a new musical theater masterpiece.

Off Broadway Theater
For all inquiries, please contact:
sydney.garick@yale.edu