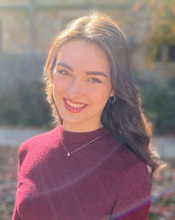 Originally from the Bay Area, Lauren is a vocalist, actor and dancer who has performed in regional and school productions since 2010. She is the third woman to sing with the Yale Whiffenpoofs, and is currently taking a gap year as a member of their class of 2021 and first-ever nonmale album co-producer. Lauren also sings jazz and produces music for Redhot & Blue (Producer of 2020 album “No More Blues,” Music Director 2018-19), writes for radio programs on WYCBX and Radio Free Yale, and dances with Taps at Yale. When she’s not wishing she were in rehearsal, you can find her listening to podcasts and making lists.