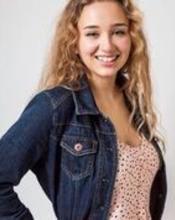 Kari Hustad is from Whidbey Island, WA. Past shows include Big the Musical, David and Lisa, Richard III, Almost, Maine, and Footloose the Musical. She also helped to write, produce, and perform a multimedia musical to raise awareness about climate change. At Yale, she played trumpet in the pit for Dreamgirls and YSD's Passion, Assistant Music Directed In The Heights, and directed The Cradle Will Rock. She is also interested in music, and is the current Head Conductor of the Davenport Pops Orchestra. She has produced the short films Running Parallel and Raindrop, and is directing Glass Baton.