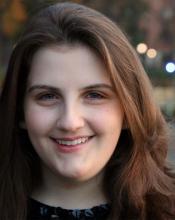 Anna has spent three summers at the Berridge Conservatory of Theater and Film in Normandy, France and one summer at the Yale Summer Conservatory for Actors. At Yale, her roles have included the Nurse in Romeo and Juliet, Dottie in Good People, and Tilly in She Kills Monsters. She also performs improv comedy with Lux Improvitas.