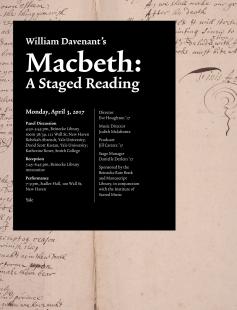 “The Tragedy of Macbeth, alter’d by Sir William Davenant; being drest in all it’s Finery, as new Cloath’s, new Scenes, Machines as flying for the Witches; with all the Singing and Dancing in it.”-Description of John Downes, prompter for the Duke’s Company, 1708“[T]o the Duke’s house, and saw “Macbeth,” which, though I saw it lately, yet appears a most excellent play in all respects, but especially in divertissement, though it be a deep tragedy; which is a strange perfection in a tragedy, it being most proper here, and suitable.”-Diary of Samuel Pepys, January 7, 1667The Beinecke Library holds the only extant manuscript of Macbeth–but it’s not the Macbeth that we recognize. In the 1660s, Sir William Davenant adapted Shakespeare’s play for a Restoration audience. His alterations included edits to Shakespeare’s language for ease of comprehension, a greatly expanded role for Lady Macduff, a clearer stance on regicide (this was an important point to clarify after the English Civil War!), several new songs and dances, and even a “flying machine” for the witches.The Beinecke manuscript is probably a fair copy used as a prompt book by Davenant’s theater company. Produced with Beinecke support and accompanied by performers from the Institute of Sacred Music under the music directorship of Professor Judith Malafronte, this staged reading will be as faithful as possible to the play as performed in the late seventeenth century.The performance will also be preceded by an afternoon panel discussion at the Beinecke centered on the manuscript. Speakers include Professor David Scott Kastan, Department of English, and Professor Rebekah Ahrendt, Department of Music, and a reception will follow. We are looking for actors, designers, and musicians interested in Shakespeare, material texts, and seventeenth-century music–or just in participating in a fun and low-pressure reading! Auditions will be held in December.