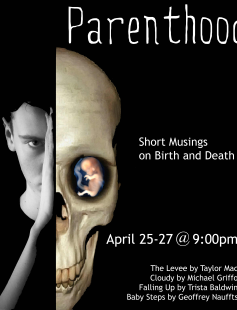 For a parent, few moments in life can be so devastating as the loss of a child. Parenthood: Short Musings on Birth and Death is a compilation of four one act plays on this challenging topic from critically acclaimed contemporary playwrights. First, in Taylor Mac’s The Levee, a couple struggling to conceive envision an unachievable future for themselves and the child they desperately want. Second, in Geoffrey Nauffts’ Baby Steps, a gay man encounters tremendous prejudice while trying to adopt a child. Next, in Trista Baldwin’s Falling Up, a man and a woman attempt to discover romance after the loss of the man’s son. Finally, in Michael Griffo’s Cloudy, Laura struggles to maintain her grip on reality after tragedy has befallen her three children. These extraordinary plays engage in comedy as much as tragedy, hope as much as despair, and life as much as death while attempting to grapple with a topic which is almost unimaginable.

We have many production roles available; please contact Director and Producer Jack Lattimore at jack.lattimore@yale.edu if you have any questions or would like to be a part of the production team.