Maroon Tales: The Indiscretions of Yvonne

by Will J. Cuppy (adapted by Ren Robins) 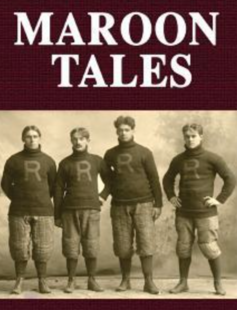 FOR APRIL 22ND SHOW (MIDNIGHT): We will be the midnight slot in Michael Gancz’s All-Nighter Festival. See this link to reserve a spot! https://yaleconnect.yale.edu/yslc/rsvp_boot?id=1584450

Will J Cuppy was a very strange man. A satirist at heart, he lived at times as a hermit on Jones Beach Island (before it was a tourist attraction), and at other points in a small Manhattan apartment, where he was basically nocturnal and lived off black coffee, and small sporadic meals of peas, meat, and bread. He’d spend long stretches in his flat, reading vast quantities of text and recording his thoughts on thousands of 3 by 5 index cards he kept strewn about. Even so, Cuppy was a funny and personable man, and had some dear friends who respected him greatly. Threatened with eviction, he committed suicide in 1949 at the age of 65.
Cuppy’s first published work – a collection of short stories he wrote while at UChicago called the Maroon Tales (1907) – is surely his most overlooked. “The Indiscretions of Yvonne de la Plaisance” is one story from the collection. It is funny,  enjoyable, and downright strange. It captures a certain early 1900s collegiate prankster energy while tackling gender fluidity and co-education issues. It reads like some glorious cross between a horror story, a jazz age tale, and a coming of age episode. Sort of halloweeny, gay, 1920s collegiate chaos. There are multiple plot twists.
Maroon Tales is guaranteed to keep you on your toes.
For all inquiries, please contact:
renata.robins@yale.edu

FOR APRIL 22ND SHOW (MIDNIGHT): We will be the midnight slot in Michael Gancz’s All-Nighter Festival. See this different link to reserve a spot! https://yaleconnect.yale.edu/yslc/rsvp_boot?id=1584450