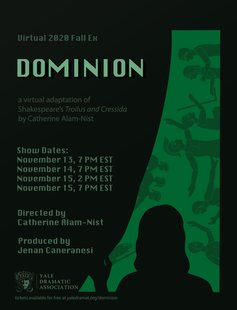 A virtual adaptation of Shakespeare’s ‘Troilus and Cressida’, this play is set in a close near-future, in which the ever-expanding Greek empire is besieging the city-state of Troy. The script follows several women in Troy (Cressida, Cassandra, Helen and Paris), as they experience what Troy’s downfall means for them and those that they love. The play also directly confronts and responds to the traditional ‘hero’ narrative that pervades much of the commonly-taught Western canon through reinterpreting the relationships and personas of famed Greek soldiers (i.e. Achilles, Menelaus, Agamemnon, etc).
This is an original script loosely based off (and in part reacting against) both Shakespeare’s text and Homer’s Iliad; through reimagining these characters and workshopping the script as an ensemble, this production aimed to place these characters within a more recognizable context and dialect, thereby allowing a contemporary cast to more directly question, challenge, and find commonalities with them. This production also sought to place people of marginalized genders, people of colour, and LGBTQ+ people at the forefront of a narrative that has often sidelined them in the past.
Through our re-imagination of these stories and characters, Dominion aims to tell a story for our times which asks: what happens to the love shared between people in an isolating time? What can ‘love’ mean when different people invoke its name, in ever-shifting contexts? And in a world where power is not equally distributed, who gets to say what counts as love, and what doesn’t?
Content Warnings: homophobia, internalized homophobia, sexual harrassment, sexual assault, misogyny, violence, war, death/mourning, cultural/geographic dislocation.
All content warnings are topics that are discussed during the duration of the play. Violence, sexual harrassment, and sexual assault are not depicted onscreen.

You do not need to be currently enrolled and/or living on campus or in New Haven to participate. The entirety of this production will be conducted in a remote, socially distant manner.