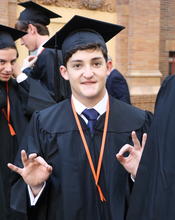 I am a first-year in the college with experience acting and stage managing in high school. My roles include:

Friar Lawrence in Romeo and Juliet

Antipholus of Ephesus in A Comedy of Errors

Joey Biltmore in Guys and Dolls

Stage Manager for A Man For All Seasons

I also have some experience from Yale:

I was Dev in Stupid Fucking Bird (directed by Lina Kapp)

I was associate marketing manager for the dramat for a semester