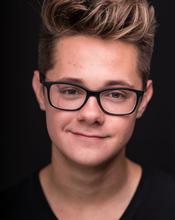 John Paciga is an eighteen-year-old New Jersey native. He has been involved in theater for seven years, and is also a pianist, singer, and songwriter. Notable roles include the Baker in Into the Woods, Carl Hanratty in Catch Me If You Can, Cookie McGee in Nice Work If You Can Get It, and Truffaldino Battochio in The Servant of Two Masters (all with the Delbarton Abbey Players). John also wrote and directed three one act plays during his time at Delbarton School. He directed Delbarton’s a cappella group, the Benedictones, for two years, and organized Delbarton’s coffeehouse (open mic) events for three. In October, 2017, John released his first album, Other Side of Town, and plans to release his second in the coming months.