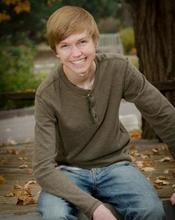 Jacob Neis (and yes he is quite nice) hails from the slightly snowier state of Minnesota, where theater isn't nearly as big, don' cha know. He has attempted, with varying degrees of success, to sing, dance, act, and juggle in years past. He's a math major strongly considering cheesemaking as a fallback career. While not making music, eating ice cream, or catching up on DS reading, he likes Sudoku, Sherlock, and signing his suitemates' names onto YPU panlists.