The Trouble with Summer People 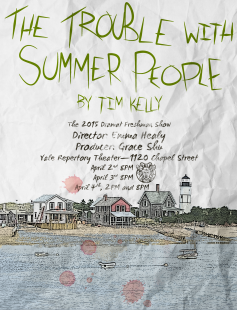 Rupert Baxter, just out of the Army, meets future wife, Janis, at a skating rink (she fell down and he picked her up). They’ll honeymoon at “Wind Chimes,” a guest house on Cape Cod that belongs to his aunt. Sadly, a few weeks before they arrive, a nasty murder is committed: a boarder’s neck is broken by a noose. Since Rupert was with the military police, his aunt is certain he’ll discover “whodunit.” Rupert neglects to tell his aunt, however, that he was reduced in rank and assigned laundry duty for mistakenly arresting the Norwegian Ambassador. The murder is a perplexing puzzle, dealing with a rare set of coins called the “Canterbury Pennies.” Even though the season hasn’t started, summer people (tourists who stay for the summer) start appearing and a pesky kid who’s convinced he’s a criminologist begins to hamper about Rupert every step of the way. The Puckle Sisters, who run a funky gift shop, accuse the newlyweds of stealing a weather vane and the police chief is planning to arrest them. A storm (naturally) traps all of the suspects in the house, and they agree to play “the truth game.” In doing so, the killer is unmasked. Are the Canterbury Pennies real? Why are the shabby rooms three hundred dollars a night? And what has any of this got to do with bicarbonate of soda? Each role is a comic gem.