a play for our time

by Caroline Bird, After Euripides 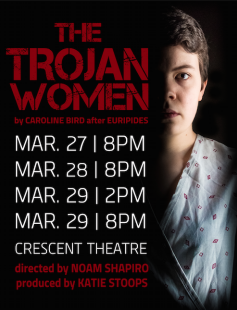 The Trojan War is over. Beyond the prison walls, Troy and its people burn.Inside the prison, the city’s captive women await their fate. Stalking the antiseptic confines of its mother and baby unit is Hecuba, the fallen Trojan Queen. Alongside her, Andromache, Cassandra, and Helen grapple with their pasts and futures. But their grief at what has passed will soon be drowned out by the horror of what is to come, as the Greek lust for vengeance consumes everything - man, woman, and child - in its path.Raising questions about war, power, rape, sexuality, and violence against women, Caroline Bird’s modern language adaptation of this Greek tragedy reveals that Euripides’s themes and characters are as contemporary as ever. Audience discretion is advised: The Trojan Women contains strong language, themes, and imagery–including nudity–that might be inappropriate for some audience members.You are invited to join us after each performance for a post-show discussion.