by A Musical Revue 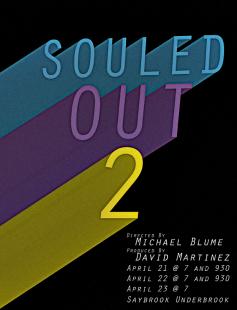 Soul’s back!Souled Out 2 is a musical revue that highlights some of the outstanding soul and rhythm and blues music of the past twenty years, including mainstream artists such as John Legend and Beyonce, as well as lesser-known modern soul artists such as Sharon Jones, Jamie Lidell, and Ledisi. The show will feature raw, unfiltered, gritty musical performances harking back to the classic soul sounds of the 1960s and 1970s. Featuring a live band and a small ensemble of singers, ‘Souled Out 2’ will bring the energy and enthusiasm of last year’s ‘Souled Out’ with an innovative and revamped approach to the material. The show aims to capture some of the many directions that black American music has taken in recent decades and to bring these fantastic sounds to the Yale stage.