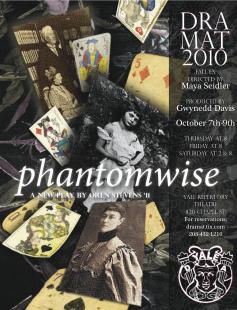 In 1862 Charles Dodgson told a girl named Alice Liddell a story about another girl, also named Alice, who fell down a rabbit hole into a fantastical world - a story that would later be published under a pseudonym and be one of the most influential stories to children everywhere.In 1932 Alice said in a letter to her son “I am so tired of being Alice. Does that sound ungrateful? It is - only I do get tired!”Phantomwise is the story of everthing that happened between. Sweeping between fantasy and reality, it tells the story of Alice’s life, and her own relationship to the story that made its author famous.