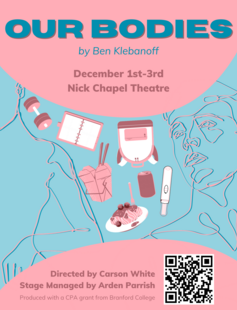 Our Bodies is a romance/romantic comedy(?)-drama about Will, a fairly recently out gay trans guy who has fallen for his cool, hot, gym-bro co-worker, Jeremy (who may or may not even be into guys), and how he works though his anxiety and gender dysphoria as they begin their relationship.

It’s also a show about Stazia, Will’s younger sister. She’s a junior in high school and still figuring out the world and how to find her place in it. She’s run away from home and is crashing on Will’s sofa, annoying him to no end. She’s avoiding her sweet, golden-retriever of an on-again-off-again kinda-boyfriend-maybe, Garrett, and trying to rely on her best friend(?) Abbie who’s not really able to help her anymore but in the end she has to let Will in and let him care for her.

The play deals with challenging themes but underneath it’s a hopeful show about how the two of them find family in each other despite their sucky parents (to put it lightly) and finally start giving each other and receiving the love they deserve. It’s not domestic bliss but it’s home.

Script (There's no expectation to read this before joining the team/auditioning but it's here if you want it) (.pdf - 413.44KB)

Venue Accessibility:
Lobby, upper level seating, and facilities are accessible via an elevator inside the entrance to the Trumbull Head of College's office.