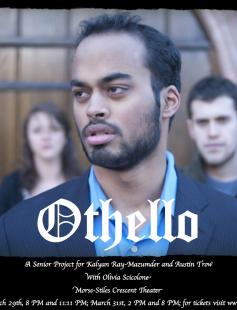 Othello is unique among Shakespeare’s tragedies in having almost no public dimension. All the others, with the partial exception of “Romeo and Juliet”, although they portray human beings (especially families) in conflict, are at least as interested in the state of the state, whether it’s ancient Rome, or ancient Britain, or Scotland, or Denmark. It’s true that in Othello the city-state of Venice is given its song and dance in Act I; but once the action moves to the island habitat of Cyprus, the public action essentially shuts down. Verdi’s opera of 1887, “Otello,” famously cut Act I altogether. The Yale production therefore focuses all its energies on the inner lives of its few characters and their troubled relationships. Hence our choice to play it in a small theater (the Morse-Stiles Crescent, seating only 120), with only eight actors, in the round, with a text stripped down to about 100 minutes without intermission, and in contemporary “found” costumes emphasizing the immediate and immediately recognizable human reality of what is passing in front of the audience in the very here and now of the same room.