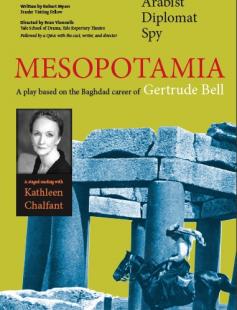 SIDES ARE POSTEDIf you would like to look at a copy of the script before auditions, please email kate.pitt@yale.edu with your request. Gertrude Bell, along with her colleague T. E. Lawrence, was the best known, most accomplished, and most renowned European Arabist of the early twentieth century. The second woman to graduate from Oxford, she traveled extensively throughout the Middle East, learning Persian and Arabic, and training as an archaeologist. Shortly after the turn of the century, she led important archaeological expeditions to Syria and Iraq, subsequently writing highly regarded and popular accounts of these expeditions. During and immediately after World War I, Bell served as Britain’s Oriental Secretary of Iraq and was responsible for drawing the borders of the state of Iraq, engineering the accession to the throne of King Faisal, helping to quell the insurrection of 1920, and founding the Iraq Museum. Despite these accomplishments, Bell apparently committed suicide in Baghdad in 1926 at the age of 56.Mesopotamia is set in the British Oriental headquarters on the banks of the Tigris River in Baghdad during the 1920s and dramatizes the creation of Iraq, the violent insurrection of 1920 and Bell’s Machiavellian political maneuvering. The play has had readings at Pegasus Players Theatre, in Chicago; the New York Theatre Workshop, in New York; and at Theatre Row, in New York, in 2009, where it was produced by the New Group and where the renowned actor Kathleen Chalfant read the role of Gertrude Bell. Kathleen Chalfant reprises this role in a staged reading directed by Evan Yionoulis, Professor, Yale School of Drama, Resident Director, Yale Repertory Theatre.Playwright Robert Myers is this year’s Franke Visiting Scholar at the Whitney Humanities Center. Mr. Myers is a distinguished playwright and professor of literature and creative writing at the American University of Beirut, where he has also served as Director of the Center for American Studies.Co-sponsored by American University of Beirut, Council on Middle East Studies, Whitney Humanities Center, and World Performance Project at Yale.Free and open to the public. No reservation necessary.