by Aristophanes + translated by Sarah Ruden 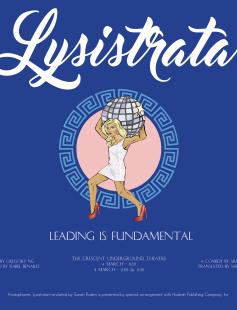 Ancient Greece. The House of Athena is holding its breath – it is on the brink of war with the House of Sparta, and who knows what terrors will shower down upon its helpless drag queens? Lysistrata, a beautiful, fishy young queen from the House of Athena, has come to the fore, insisting that peace must be made. And how? Of course – the two Houses must cooperate and, together, withhold sex from the men of Athens and Sparta until they agree to end the war. This production is a brand new reading of that old battle of the sexes, through the glittering lens of drag performance. There will be voguing. There will be pageant queens, butch queens, camp kings. There will be charisma, uniqueness, nerve, and talent. Come to the ball. Watch the making of a legend. Pepper LaBeija. Dorian Corey. Lysistrata. The bibliotheke is open!*There will be a short talkback with Sarah Ruden, the translator of this edition of Lysistrata, after the Saturday (March 5) matinee.