The Lieutenant of Inishmore 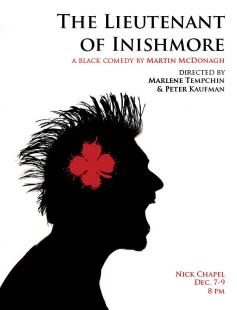 Padraic, a murderously insane member of the Irish National Liberation Army (actually an ex-member, he created his own splinter group when he decided the INLA weren’t violent enough) receives a call from his father saying that his cat, the only thing in the world that he loves, is sick. This drives Padraic into a rage and prompts him to return to Inishmore (where he father lives) with murder on his mind. What he doesn’t know is that the cat is actually dead. Or is it? More mayhem ensues when Mairead, a wannabee terrorist and a group of disgruntled INLA members find out that Padraic is headed home and decide to meet him there.We are looking for both men and women to fill 6 roles. Females may be cast for male roles (and, to be fair, if any male wants to audition for the 1 official female role, he is welcome to).