by Shakespeare and the Company 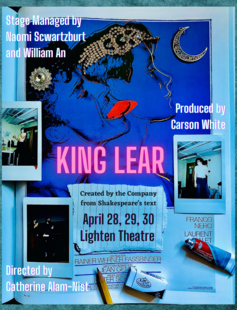 King Lear is Shakespeare’s sweeping tragedy that starts with an aging king telling his three daughters that he plans to split up his kingdom based on how much they each will publicly say that they love him. What follows is an epic, sometimes darkly humourous, and consistently heart-wrenching tale that poses challenging questions about the nature of love, care, family and loyalty, and the struggle to stay true to what we value and hold dear amid ever-shifting circumstances.

Our staging of Lear places the action among a group of artists, academics and bohemians in early 1970s New York, in which an artistic empire is being split up among its various factions, and rivalries, heartbreaks, and violence ensues among the members of this artistic clique. With visual parallels to Andy Warhol’s Factory, the Hotel Chelsea, and numerous cultural/artistic touchstones of the time, our depiction of the story raises questions about the connections between family, love, sex and artistic creation, as well as aging, decay, violence and destruction. Especially after two years where artists and artmaking communities have had their lives turned upside down by the pandemic, we think that this will be a very exciting take on the play for undergraduate theatre artists to explore, as well as for Yale community members to eventually experience. We are also looking forward to exploring the play’s themes of grief and caretaking in the COVID era, during which several members of the cast and crew have found themselves or their loved ones unexpectedly placed into caretaking roles.