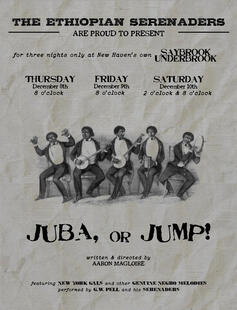 Juba is jumping very fast at the Colosseum, but too fast is worse than too slow, and we advise him to be wise in time. It is easier to jump down than to jump up.
—THE ERA, AUGUST 4, 1850

In two years, William Henry Lane will be dead.

In eleven years, the Rebels will open fire on Fort Sumter.

In forty-two years, a train will pull out of New Orleans with a black man in its white car.

In eighty-one years, black men will arrive at a pool in Pittsburgh. White men will attack them and hold their heads under the water until they give up their attempts to swim.

In ninety-seven years, Marian Hannah Winter will write about a man who took his name from a bush. Or a slave. Or a jig. Who knows. She’ll say he sprung full-panoplied from the brow of Terpsichore.

In one hundred and fourteen years, a living president will sign a dead president’s act into law.

In one hundred and seventy-two years, Bill will host a dinner at his home. There’ll be great chicken, average beer. Maybe some singing.

But for now it’s summer, 1850. Hot, if I didn’t already mention. The Ethiopian Serenaders are preparing to take the stage. William Henry Lane is among them. Though no one knows what it means, he goes these days by the name Master Juba. And you really ought to see him dance.