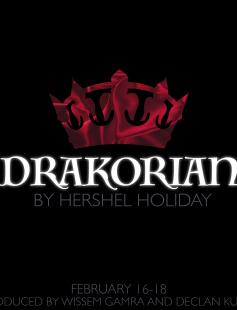 Augustus the first, the semi-legitimate king of a country picking itself up from a decade of civil war, is Drakora’s last hope for a peaceful future. He must marry and procreate to secure the ill-gotten gains of his father, perpetuate a legacy he has no interest in keeping, reconcile his self-loathing with his need for self-preservation against treasonous courtiers, and keep his head on straight the whole while. His faults are few but fatal, his fits go from spat to tiff to war in the span of an afternoon. His is the intersection of power, privilege, disinterest, and depression, and this is the story of those caught in the crossfire of Augustus’ war against his own self.

The story is told through a blend of contemporary musical theater and music from the African Diaspora. There is rapping. People interested in making this vision come to life are encouraged to reach out to the email below, or get in touch with one of our producers!

Off Broadway Theater
For all inquiries, please contact:
hershel.holiday@yale.edu