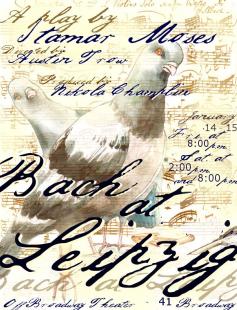 Bach at Leipzig is a play written by Yale School of Drama graduate Itamar Moses. It centers around the events that occur in Leipzig when the position of Thomaskantor becomes vacant after Johann Kuhnau’s death. Six musician (all named either Georg or Johann) arrive at the Thomaskirsche to compete for the post. Samuel French, the publisher of the piece, calls the play, “a fugue-like farcical web of bribery, blackmail, and betrayal set against the backdrop of Enlightenment questions about humanity, God, and art.”A majority of the play takes place in 1722, the year when the Counter-Reformation was at its peak, the Enlightenment was developing science and secularism, and when music was ready to jump out of the Baroque and into Classical. Itamar Moses’ work has drawn comparisons to Tom Stoppard for good reason. He adroitly juggles all of these topics and weaves them together in a way that demands the audience keep pace and examine their own views on the purpose of art, the nature of God, and value of progress. Moses is so clever, the entire structure of the play is similar to the form of the fugue, and he reveals this fact at the beginning of Act II in a way that beautifully reminds the audience that life sometimes imitates art.

Off Broadway Theater
For all inquiries, please contact:
austin.trow@yale.edu