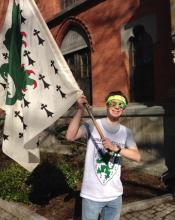 A Film Studies/History double major from Cleveland Ohio, Russell has loved movies since he was very little and has enjoyed making them since middle school, when he and his best friend made a pair of feature-length stop-motion Lego movies. He is the president of Bulldog Productions for the 2015-16 school year and was Vice President previously. Through BP, he has directed Captain Invincible is Dead (2015) and She's Kind of Quiet (2013), produced Lost and Found (2014), and written an episode of B-Roll Season 2 (2014). His favorite movies include Star Wars, Lord of the Rings, Casablanca, 8 1/2, James Bond (well, some of them), Sunset Boulevard, and Raiders of the Lost Ark.