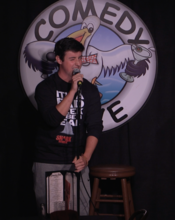 I’ve  been a writer since my first memoir Sadly, Heart Surgery, in second grade. I’ve been an actor since my leading role of Tevya in the Mazer Family Living Room Producions of Fiddler On the Roof: A Two Sibling Production. But I’ve been an entertainer since I was born. And that’s what I hope to provide you, on whatever occasion it is that you’re reading this–it is the first thing that pops up when you google my name. Hello future employers!

Though I started Yale by playing The Lovesick Cowboy in Radium Girls, I promptly stopped acting. I wrote a musical called So, Betsy! that would’ve premiered on Yale’s Campus if it wasn’t for the pandemic, and and a play called “Stalled” that was featured in the 2021 Yale Playwrights Festival. In my senior year, my sister and my’s musical S.S. Cancelled and my playwrighting thesis Keep The Change were both produced as worksshops. I directed of The Good Show, for two years, performed in Playspace, and did stand-up at open mics; produced of One Seat Over, The Yale Herald’s podcast about sharing stories to create a more understanding community; and the host of Crackin’ Peanuts! Yea, I have a podcast. Bite me.

Most everything I do (but mainly just cooking and joking) comes with a heavy dose of salt, and I really just want to share stories. There are too many good ones to go around.