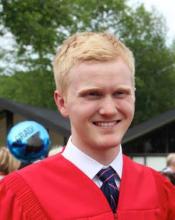 James Nydam has played Charlemagne in Pippin, Jesus in Godspell, and Cinderellaâ€™s Prince in Into the Woods at the Rivers School. In addition, he was a part of the barbershop quartet in The Music Man and played Clive Wickenham in While the Lights Were Out at Santa Fe Christian Schools. As well as being a semifinalist at the national Classical Singer musical theater competition, he has studied voice for two summers at the Boston University Tanglewood Institute and played Japheth in a production of the childrenâ€™s opera Noyeâ€™s Fludde at San Diego Symphony Hall. He played the main character in a short senior film project at the Rivers School. He hails from Wellesley, Massachusetts, but his heart lives in San Diego.