What is a casting call?

A casting call is where you assemble the actors needed to portray your cast of characters. It is where you find who fits each role best, and which set of actors work well together.

A character breakdown is the list of all the roles in your film that have speaking parts and ample screen time. A breakdown does not include any characters who are moving in the background of the scene and do not interact with other character’s beyond simple gestures or greetings (i.e. extras). In other words: what are the essential roles needed to create your story?

The breakdown is organized as follows:

The final breakdown should contain no more than 3-5 sentences on each character. Below is an example:

Eric Lombard: Lead. 20’s. American. Athletic. Confident and suave. A former college football player recently dumped by his longtime girlfriend in Florence, he tries to get his life together and ends up being a key player in the violent local game of Calcio Storico. He has an affair with Stefania.

Now that you have your list of characters-to-cast, you should create short snippets of dialogue and action from the script for each character, called a side. Sides should be parts of scene that are the most dramatic, or reveal the most about a character’s personality or conflict. They should allow you to see how the actor could potentially play the role. As a general rule, do not make your sides more than 3 pages long. They should be short, important moments. Sides do not have to be monologues, but also try choosing sides that have less than 3 characters in a scene (3 or more: save those for callbacks). Below is an example side: 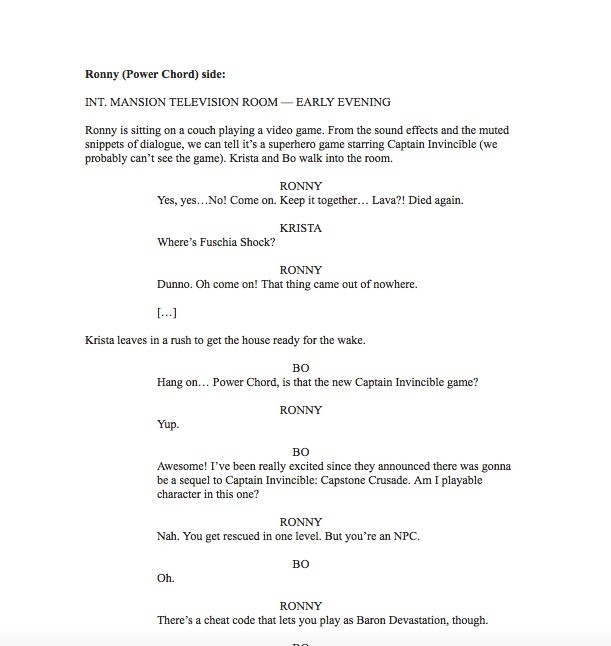 Decide how long you want your auditions to be. For most, a 10 minute block for each actor is sufficient. Your team should also establish how many actors they would potentially like to see, and how long they want to be in auditions each day. For example, a team that sits for 4 hours with 10 minute intervals can see 24 actors in that period. This all depends on the size of your cast.

Where to hold your casting call

Avoid holding casting calls in your dorm room. The best places to hold casting calls are large seminar rooms, dance studios, or rehearsal spaces. There are several resources to help you secure a location:

For Performance and Rehearsal spaces:

Undergraduate Production manages gallery, performance, and rehearsal spaces in all of the residential colleges, as well as the Off-Broadway Theater and the Theater and Performance Studies black box, Co-Op High School Theater, and ECA Arts Hall. Consult their venue pages to determine the appropriate location for the type and scale of your production and contact them directly to reserve.

Reservations should be made at least one week in advance.

One of the hardest/most important parts of the casting process is getting the word out about your upcoming production. Below are several ways to do so:

We encourage you to post your auditions on the Auditions page, where you will be able to upload your character breakdowns, sides, audition time, and locations.

The Yale Film Alliance – Newsletter goes out every Thursday or when there is reportable content.

The newsletter is a general film newsletter and a combination of The Yale Film Society, Bulldog Productions, and Project Lens newsletter lists.

Another way to reach out to potential actors is by creating a Facebook Event. Create a Facebook event entitled “Audition for [insert film title]” and invite as many of your friends as possible. While it’s not an accurate way to track audition sign ups, it’s good for spreading the word.

Your team should also be posting on their walls and in relevant groups about the casting opportunity.

Lastly, your team should also be emailing people they know and are friends with to see if they might be interested in auditioning. This can be especially useful if you know a particular role might be of interest to a particular person. However, do not spam, and do not offer someone a part without having them first go through the audition process.

It is important that you have a printed sign-in form at your audition for each actor to fill out. The form should contain:

During the Audition (Checklist)

Congrats! You have seen many people and are starting to get an idea of what your cast might look like.

Before moving on to scheduling callbacks, take some time with your production team to review auditions you liked, disliked, and whom you want to see again. From those lists, identify the people who you want to callback and others who you know are not a good fit. Email the people who are not making it to the next round and let them know. Tip: never say you can’t offer a part, say that you cannot offer a principal role. You might have a need for extras in the film, and until casting call is over, you don’t know if you might need them! Always be courteous, and always thank them for their time.

As with auditions, you should have locations and time frame already decided and ready to go.

In callbacks, not only do you want to see actors do roles again, you want to test their chemistry with other potential cast-mates. Therefore, callbacks should be done in groups. Find a time that works for all the people you need to see. If necessary, split into two groups, making sure that all of the roles are covered in each group, or as best as possible. Callbacks with groups tend to run from 30 minutes to an hour, but no more than 90 minutes (this also depends on the size of the cast).

Email actors with callback times and location, and make sure they confirm.

The production should also be using a different selection of sides for the callbacks (This is where those 3 or more character scenes come in handy). No need to send it to those auditioning, they will read them at the callbacks.

Make sure, as always, to have extra copies of your sides.

Internally, the director should have an idea of which combinations of actors they would like to see. The director will then see each group, and then selectively swap roles with actors. Every actor should have the chance to speak at least twice for the role(s) they are auditioning for.

Keep callbacks light and relaxed. You should be looking to see how people work with others and how they build off of each other. Sometimes having actors read for opposite roles for fun is a good way to break the ice or alleviate tension.

Callbacks should also be recorded, and keep the notes to a minimum.

You have seen everyone, you have been blown away by their talent, and now it’s time to make your casting decisions!

This should happen as soon after callbacks as possible, so that the performances are fresh in your mind. Look over the videos, the notes, and keep these evaluators in mind:

Having worked through those questions, assemble your Top Choice Cast. You should be prepared to not get all of your top choices. Therefore, have 2-3 backups for each role you are casting, if possible. If it comes to it, don’t be afraid to consider people you liked, but didn’t decide to callback.

Note: Top choices shouldn’t be backups for other roles

Calls should happen as soon after callbacks as possible.

Always call people to whom you are offering a part. It is helpful while doing this to keep a running tab of who says yes, who needs time to think, and who is going pass. Color-coding the names of actors with those three notifications is a good way to stay organized.

If they say ‘yes’: Congrats! Mark them as green and consider that role cast.

If they say ‘maybe’: You must give them time to think about it. If they are hearing back for other roles, ask them when that might happen and ask them to follow up with you then. This of course means you should follow up with them, once they get all their casting decisions. A general rule-of-thumb for wait time is 24-48 hours.

If they say ‘no’: Thank them for their time. Call up your next choice for the role and start the calling process over.

Congrats! You have an official cast for your film and are one step closer to getting it made!

First things first: Be sure to email the other actors you called back and let them know you are unable to offer them a part. Always leave the possibility to be an extra on the table, as well as the possibility of helping out on crew.

Also, be sure to announce your cast on the Yale Film Alliance webpage for your film!

For any further questions on how to cast a film, please email us at yalefilmalliance@gmail.com

* Lead= in most, if not all, scenes: the story revolves around them; Supporting = in most scenes. Helps build on lead’s story; Cameo= least amount scenes. Could be important but has the least amount of screen time.

* This should be done so that the age is a range. When putting down ages, keep in mind your actor’s might not be that age, but must be able to playwithin that range.

*** For student film, it is suggested that you be incredibly flexible when using physical traits as part of a deciding factor.