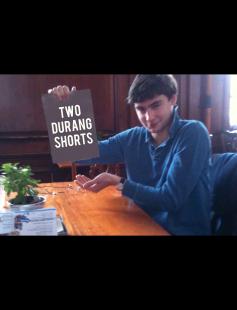 DURANG/DURANG consists of six Christopher Durang shorts―we will be putting up “For Whom the Southern Belle Tolls” and “Wanda’s Visit.”FOR WHOM THE SOUTHERN BELLE TOLLS: A parody of Tennessee Williams wonderful play THE GLASS MENAGERIE. In this version Amanda is frustrated with her over-sensitive, hypochondriac son named Lawrence. Lawrence refuses to leave the house or get a job; he’s too shy to ever met anyone; and he spends all his time playing with his collection of glass cocktail stirrers…Lawrence’s more regular brother Tom brings home a “feminine caller” from the warehouse, and Lawrence is overwhelmed by the butch girl Ginny who is deaf and shouts all the time.WANDA’S VISIT: The story of a suburban couple, Jim and Marsha, who are starting to feel a little stuck in their marriage after 13 years. Not unhappy, just… restless. Jim gets a letter from an old high school girl friend named Wanda, who asks to come visit. Jim is excited by the prospect of this visit, but Marsha dreads it (but doesn’t say so). Wanda shows up, and she’s quite a handful. Vibrant and talking non-stop, Wanda is warm and overwhelming. She hugs Jim a lot, and keeps telling Marsha how great he is. Then she bursts into tears, saying that in high school everyone presumed she and Jim would get married.Descriptions from http://www.christopherdurang.com/FullDurangDurang.htm.We will rehearse for 2 hours each week from January until tech week, during a regular time slot that will be determined after casting. As an actor, you may be asked to lead part of a rehearsal. This process is a workshop culminating in a performance―rehearsals will be important and rewarding.