An Evening of Bharatanatyam and Live Carnatic Music 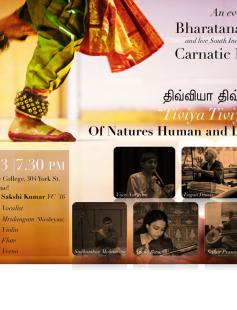 WHO: Bharatanatyam dancers Sisira Gorthala (YC ‘13) and Sakshi Kumar (YC ‘16) and a talented team of musicians: Vijay Narayan (YC ‘12) for vocals, Sneha Ramesh (PhD ‘13) on violin, Sudharshan Mohanram (YC ‘13) on flute, Srikar Prasad (SOM ‘14) on veena, and percussionist Fugan Dineen (Wesleyan PhD Candidate) on mridangamWHEN: April 26th, 2013 at 7:30pmWHERE: Crescent Underground Theatre in Morse College, 304 York St.ADMISSION: Free. All are welcome!SUPPORTED by Creative & Performing Arts Award from Morse College and Yale Raga SocietyBharatanaytam is an art form entrenched in the tradition of the Hindu religious text Natya Shastra, devadasis or temple dancers, and South Indian counterparts of Hindu mythology. Thousands of years of refinement, invasion of court life, and renewal of temple traditions form the historical context of this art that has styles with roots in famous regions of Tamil Nadu. Bharatanatyam brings stances similar to a Western style of ballet, but accompanied with a different set of intricate gestures full of meaning and ornamentation.This is a rare but exciting opportunity to see a pure and full length Bharatanatyam performance that has live accompaniment! SISIRA GORTHALASisira Gorthala is a senior biomedical engineering student at Yale. Having tiptoed in ballet pointe shoes and tap shoes for a better part of her life in the Deep South, Sisira found her love in the classical art of Bharatanatyam later than most dancers. She studied in the Vazhuvoor style, under Smt. Sunitha Raj, several years before performing her Arangetram in 2007, to the backdrop of the Blue Ridge Mountains of North Carolina. Soon following her first show, she studied two other styles, Thanjavoor and Kalakshetra under other gurus. This advanced instruction took her to Atlanta, Washington, D.C. and Chennai. Since her Arangetram, she has given two more solo shows as fundraisers and hopes to continue joining dance with service. At Yale, she has joined the efforts of Yale Raga Society in performing on campus and giving lecture demonstrations. Fun Fact: She has taught Bharatanatyam to ballet students in North Carolina, to preschoolers in Northwestern China, and to middle school students in Denmark. SAKSHI KUMARSakshi Kumar is a freshman at Yale, currently undecided in her choice of an academic concentration. A global denizen, Sakshi Kumar was born in Chennai, to a family from Allahabad, UP, but moved to Hong Kong as an infant. She began training from the age of five in the unique and renowned style of Balasaraswati—a pioneer dance-master, who is credited with exposing this ancient art form to those outside South India and making this a globally recognized art. After nine years under Smt. Ranjini Menon, a pupil of Balasaraswati herself, Sakshi performed her Arangetram to the backdrop of soaring Hong Kong towers to a diverse audience that would have only had the chance to see a couple of Arangetrams in Hong Kong history. She has since given lecture demonstrations and performances in Hong Kong, China, and Macau. Among her accolades, she is a talented former field hockey player, having played on the under-18 and under-21 National Teams for Hong Kong.