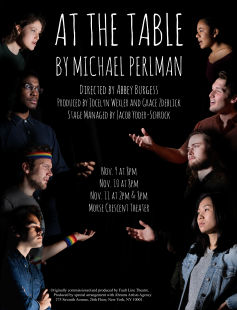 When a group of old college friends reunite for a weekend at a lakeside cabin, adding in a few new faces, what’s the worst that could happen?

The play’s third ever production and college premiere, AT THE TABLE forces us to investigate the question of who IS allowed at the the table when discussing today’s difficult issues, from abortion to racial stereotyping, constantly fast-paced, biting, and surprising .

Chris Jones, Chicago Tribune critic lauded its most recent production: “Balm is not on the agenda here — but this is one of the most riveting shows of the theater season and so juicy and apropos of life as currently lived that nobody in the house Sunday afternoon was anything other than rapt.”

The characters are left questioning everything they thought they knew, and you are left with the one question that’s hardest to ask: when am I allowed at the table?