A Theater Studies Senior Project in Acting for Gilberto Saenz 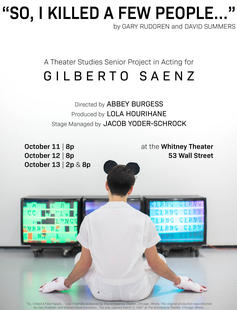 “ ‘When’s he going to talk about the blood and the killing and the gore?’

That’s what you came for isn’t it?

Hey… how often do you get this close to a so-called serial killer?”

Archie Nunn is on Death Row for the murder of eight people… well, actually it’s a few more, but that’s all they caught him on. In the case of Archie Nunn v. the State of Florida, Archie has been granted permission to apologize to the families of his victims in a televised event one week before his execution, and the audience arrives eager to hear his stories of slaughter. But Archie isn’t there to talk about death. Archie is there to talk about his life, the wrongdoings of the Disney corporation, and his hunt for a memorable catchphrase that will leave him implanted in the minds of American audiences forever. In a current climate of abused media and political platforms, So I Killed A Few People seeks to explore America’s innate obsession with grotesque spectacle, and the reward given to those who trangress our moral codes. Why do we give these people platforms and spaces to speak - do they transcend our ethical boundaries? Why do we empathize with serial killers like Archie, and what realities exist behind the failings of the American criminal and judicial reform system?

It is important for our team to emphasize that the only violence that will be depicted onstage is that of the cops against Archie, played in a filmed flashback. This is a piece about humanity and redemption, rather than violence.

CW: This show includes strobe lighting and moments of police brutality It also includes references to suicidal ideation and sexual assault, as well as graphic descriptions of violence and homicide.