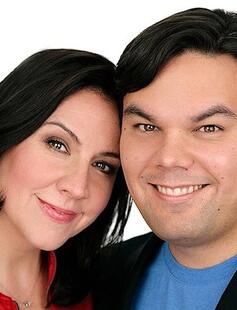 Interested in a career in composition, theater, film, or TV? Join us for a conversation with Bobby Lopez and Kristen-Anderson Lopez, the Academy Award and Grammy-winning composers and lyricists behind Frozen, Coco, WandaVision, and more! This class will combine and discussion with Bobby and Kristen about their expansive careers in the theater and entertainment industries with a Q&A. A casual catered reception will follow the class.

Bobby Lopez (Yale ’97) and Kristen Anderson-Lopez (Williams ’94) are best known for co-writing the songs featured in the Disney films Frozen, its sequel, Frozen II, and Coco. They won the Academy Award for Best Original Song for “Let It Go” from Frozen and “Remember Me” from Coco, and two Grammy Awards for their work on Frozen. Bobby, who also co-created The Book of Mormon and Avenue Q, is one of only 17 people who have won an Emmy, a Grammy, an Oscar and a Tony Award, the “EGOT”. He is the youngest and quickest to win all four, and is also the only person to have won all four awards more than once. Kristen and Bobby have also been nominated for numerous additional Tony, Grammy, Emmy and Golden Globe Awards. Recent projects include “WandaVision” and the upcoming musical series “Up Here” on Hulu. The couple make their home in Brooklyn, NY and are parents of two daughters.