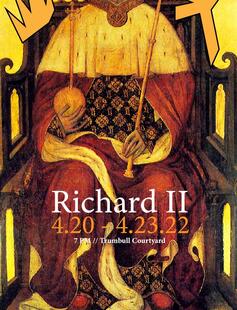 Richard II, set in the year 1398, traces the fall of the unpopular Richard II and the rise of Henry Bolingbroke, the first king of Lancaster. Richard is a young man who relishes in his role as king; but poor governance, bad advisors, ill-advised wars, and the seizure of nobleman’s land makes him deeply unpopular in the eyes of his country. After being banished by Richard in the first act of the play, Henry Bolingbroke returns to England, reclaims his land, builds an army, and deposes Richard. Richard’s absence of allies leads to a peaceful transfer of power.

The heart of the play is the gradual downfall of Richard, who must reckon with his nakedness when stripped of the veneer of kingship. The play explores the existential question of what we are without the things that define us. From the top of castle walls, to court houses, and finally a small prison cell, Richard reckons with “being nothing.” This tragedy faces themes of identity, faith, and the limitations of human life with sublime humour, sorrow, and beauty.

The directorial vision reflects Richard’s own performance of identity into the act of performance. This show will embrace its own artificiality and theatricality.