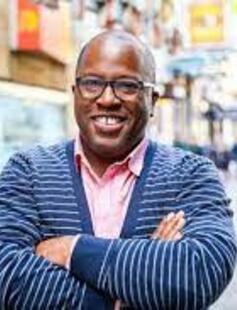 Ballroom at 220 York St
Calling all Yale musical theater and composition fans! On September 30, Michael R. Jackson joins the Shen Curriculum for Musical Theater Fridays @ Five series for a master class. The event will combine composition critique with a Q&A and discussion about the changing face of the American Musical Theater. All members of the Yale community are welcome to attend and watch! A casual dinner reception will follow the class.
To apply as a participant (composer), please submit your name, resume and a piece you could offer to dan.egan@yale.edu by Friday September 23.
Michael R. Jackson’s musical A STRANGE LOOP received its world premiere at Playwrights Horizons in NYC, followed by a run at the Woolly Mammoth Theatre in Washington D.C. A Strange Loop opened on Broadway in April 2022 and won both the Pulitzer Prize and the Tony Award for Best Musical. Michael’s other awards include a Jonathan Larson Grant, Lincoln Center Emerging Artist Award, a Whiting Award for drama, Helen Merrill Award for Playwriting, the Lambda Literary Award for Drama, a Fred Ebb Award, two Drama Desk Awards, two Obie Awards, two Outer Critics Circle Award Honors, an Antonyo Award, and a Windham–Campbell Literature Prize for drama at Yale. His next musical, WHITE GIRL IN DANGER, will premiere in March, 2023
For all inquiries, please contact:
dan.egan@yale.edu