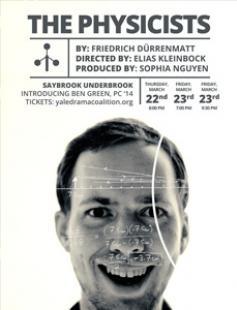 The Physicists is a satire/drama written in 1961 by Friedrich Dürrenmatt, a Swiss playwright and novelist. Drawing on post-WWII hysteria and the new worldwide fear of nuclear war, the play is set in an insane asylum inhabited by three world-famous physicists. At least, that’s what they THINK they are… As issues of insanity and identity get wound up with questions about the scientist’s responsibility to the world, we are swept along on a tale of murder, romance and suspense. Nurses, patients, and of course Herr Inspector contribute to a hilarious and gripping tale. (There’s also the surprise appearance of an ancient Biblical character!)