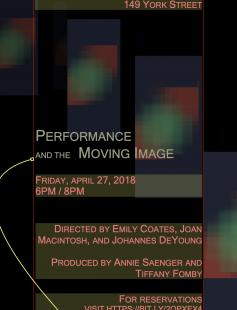 Performance & the Moving Image is a seminar which explores the boundaries between live and mediated performance through the creation of an original work that draws on methods in experimental theater, dance, and video art. This production serves as a laboratory in which to interrogate questions of live versus mediated bodies, the multiplication of time, space, and perspective through technology, and constructions of the moving image.

Theater, dance, vaudeville, and other forms of spectacle have interacted with the moving image from the onset of cinema at the end of the 19th century. While touching on some of those early examples, this inquiry is grounded in the collision of avant-garde theater, postmodern dance, performance art, early video art and technological experiments that began in the late 1960s and 70s. Special attention was paid to points of contact between emerging video art practices and avant-garde performance aesthetics. Specific examples of performances that move between live and mediated forms informed our inquiry.

Alongside and informed by this investigation, over the course of the semester the class developed this production that incorporates a variety of source materials inspired by the work of three filmmakers: Andrei Tarkovsky, Chantal Akerman, and Isaac Julien.

Center for Collaborative Arts and Media

Venue Accessibility:
The building is accessible through the main entrance at 149 York Street via a motorized lift. Facilities are all located on the main floor.