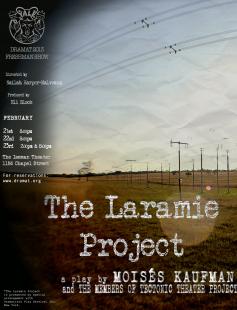 The Laramie Project explores the relationship between a town and a tragedy. In 1998, a brutal act of violence shocked the nation: Matthew Shepard, a college student, was kidnapped, beaten, and left to die tied to a fence on the outskirts of Laramie, Wyoming. Aaron McKinney and Russell Henderson, young men of a similar age, killed him because he was gay. In a frenzy to understand this murder, the national media descended on the small town, calling attention to the broader issue of hate in America. This play deals with the redemption of a community after a horrific incidence, demonstrates the interconnectedness of us all, and questions our perceived differences. Told through interviews conducted by the Tectonic Theater Project, the story is both emotionally powerful and beautifully poetic. As 2013’s Freshman Show, The Laramie Project is a great opportunity for getting a start in Yale’s incredible theater community. If you’re a freshman, WE WANT YOUR HELP! Please consider joining our crew by contacting us at Laramie.at.Yale@gmail.com, or the producer at eli.block@yale.edu for more information.For tickets, visit the Dramat Box Office at http://www.dramat.org/