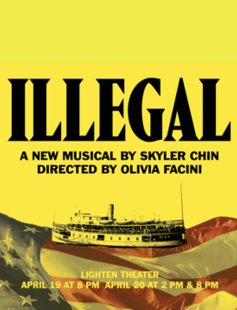 Composed by Skyler Chin (MY’19), “Illegal” is a new musical blending rap, rock, and spoken word and is inspired by the true experiences of Skyler’s grandparents. “Illegal” traces the immigration journeys of several young people from China to the United States in 1923, when the US systematically enforced its Chinese Exclusion Act by separating families at the border and imprisoning them on Angel Island (in San Francisco Bay) for interrogations. Embodied by a cast dynamic and complex characters, “Illegal” asks the timely and timeless question, “What does it take to be(come) American?”

This is inspired by one Chinese-American family’s immigration journey through Angel Island, though the story is universal; it speaks to the experiences of immigrants and excluded groups everywhere, which Yale and America need to hear, see, and understand.

ILLEGAL encourages and welcomes all people to audition, especially those from underrepresented racial backgrounds, whether they are Chinese or not; there were people from all over the world (e.g. India, Mexico, the Philippines) on the boats to Angel Island. Casting will be gender blind; we’re looking for enthusiastic people who can play the characters best. ILLEGAL tells the story of an excluded group through hip hop, song, humor, and poetry. If these resonate with you, we hope to see you at auditions!
For all inquiries, please contact:
olivia.facini@yale.edu