The Hungry Woman: A Mexican Medea

A senior project in Theater Studies for Lola Hourihane 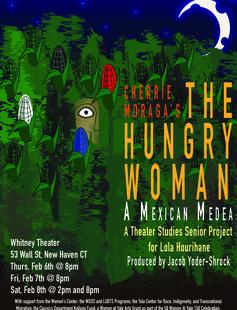 Despite having gone to war to establish the dreamed-of Chicanx homeland, Aztlán*, this supposed utopia relegates Medea to the role of housewife. When Medea starts an affair with another woman Aztlán exiles her, her lover, and son to the border between the U.S. and Aztlán. Years later Jasón — Medea’s husband in Aztlán — arrives at the borderlands to claim their son and use the son’s “more-indigenous” heritage to claim land in Chicanx, Latinx, and Native American Aztlán. When the son declares his decision to leave, Medea must choose between letting him live to become a man imbued with hate for queer women, and killing him with his innocence intact.

*on indigenous land occupied by the U.S pre-revolution

Our production will focus on anti-racist theatre (A.R.T.) methods such as those practiced by Nicole Brewer, Teatro Chicana and the Tectonic Theater Project. Come play with us in auditions - no scripts and no experience necessary.

The Hungry Woman: A Mexican Medea has been made possible with support from a Women at Yale Arts Grant as part of the 50 Women At Yale 150 Celebration. Other co-sponsors include:  the Yale Classics Department Kellogg Fund; Yale Center for the Study of Race, Indigeneity, and Transnational Migration; Yale Women’s Center; Women Faculty Forum; WGSS and LGBTS Programs.