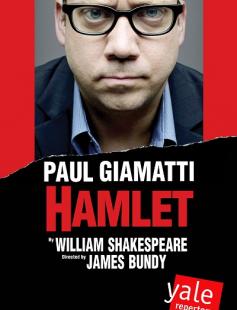 Academy Award nominee Paul Giamatti returns to the Yale Rep stage as the Prince of Denmark in Hamlet, Shakespeare’s harrowing tragedy of corruption, betrayal, and madness. Haunted by a ghostly revelation that his father, the King, was murdered, Hamlet puts into motion a vengeful plan that will have devastating consequences for his family and the kingdom.Staged by Artistic Director James Bundy, Hamlet marks the first Yale Rep appearance for Paul Giamatti since Shakespeare’s As You Like It in 1994. His critically-acclaimed body of work includes the films Cinderella Man and Sideways; HBO’s John Adams, for which he received Emmy and Golden Globe Awards; and The Iceman Cometh on Broadway.For tickets or more information, visit www.yalerep.org, call 203-432-1234, or stop by the box office at York & Chapel. Get $10 tickets with a Yale Rep 6-Ticket Student Pass for $60, or buy student single tickets for as low as $20 each.