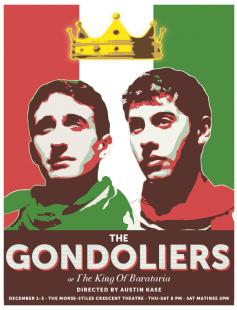 The Yale Gilbert and Sullivan Society proudly presents its Fall 2011 mainstage production!The Gondoliers is a classic Gilbert and Sullivan operetta about two humble Venetian gondolieri who, through improbable and hilarious circumstances, find themselves the joint-monarchs of a Spanish kingdom. Surprisingly relevant to the present day, it involves sharp class satire and political commentary that might be ripped from today’s headlines, not to mention accidental bigamy, mistaken identity, and all the humor and irreverence that are the trademark of one of musical theater’s best-loved collaborations. Directed by Austin Kase

Jacob Reske as The Duke of Plaza Toro

Ayanna Woods as The Duchess of Plaza Toro