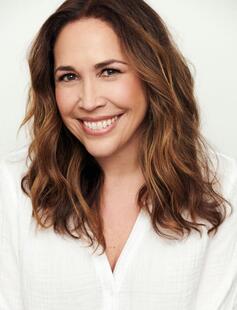 Andréa Burns is an American actress, singer, and educator best known for her portrayal of the hairdresser Daniela in Lin-Manuel Miranda’s musical In the Heights, as Carmen in Douglas Carter Beane’s The Nance, and as Mrs. Spamboni in The Electric Company. She received an Outer Critics Circle Award Nomination for her portrayal of Gloria Fajardo in Broadway’s On Your Feet! and is a winner of a Drama Desk Award for her creation of the role of Daniela in In The Heights.  Other Broadway includes Belle in Beauty and the Beast, Vicki Nichols in The Full Monty and Googie Gomez in The Ritz. Burns was in the original company of Jason Robert Brown’s critically acclaimed Songs for a New World and has since become one of the foremost interpreters of his work. She portrayed Lucille Frank in the national tour of Jason Robert Brown’s Parade, directed by Harold Prince. She was also selected by Stephen Sondheim to create the role of Celeste in his musical Saturday Night in its New York premiere. Television includes “Mad About You” (reboot), “Jessica Jones,” “Kevin Can Wait,” “Blue Bloods,” “Law & Order: SVU,” “Rescue Me,” and “Wonder Pets.” Films include In The Heights and West Side Story.  Upcoming: “Up Here” on Hulu.

All are invited to attend!

To apply as a performer, please submit a resume and two pieces you could offer to dan.egan@yale.edu

Non-participants are welcome to attend!